Things happen, sometimes, and the frustrating bits are over now. I'm in a hotel in Atlanta. They have free internet without a password.

Here is my dinner: 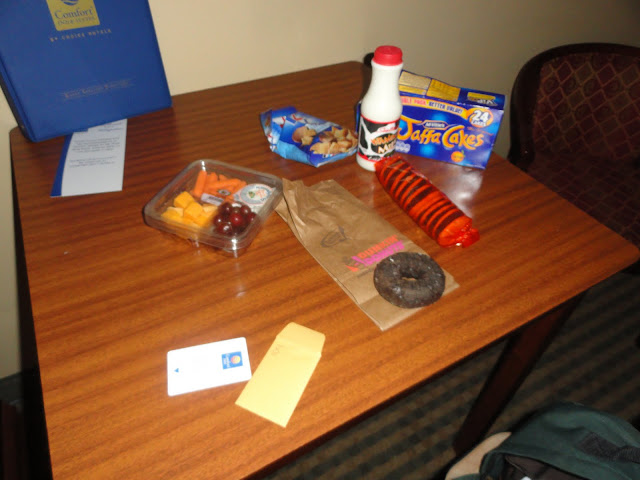 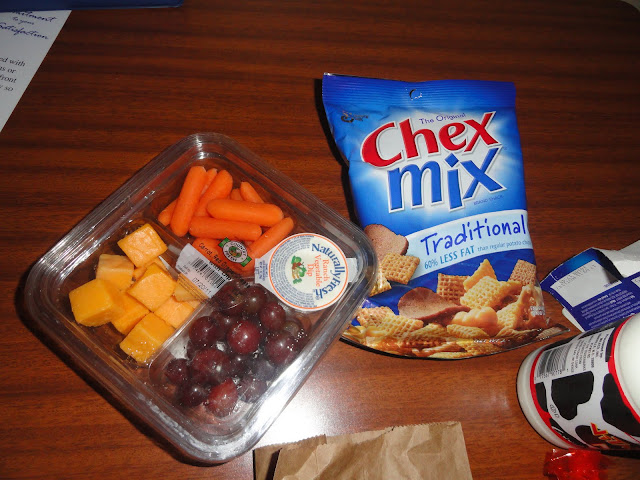 Delta airlines paid for $6 worth of it. The package with the grapes, carrots, cheese and ranch dressing. I bought the milk, Chex mix (to go with the cheese), and the Dunkin' Donut. The Jaffa Cakes I brought with me from the UK. They wrote that on my customs form. "Cookies."

I haven't eaten yet. I'm about to. Then I'm going to take a shower without getting my hair wet (because Atlanta is a humidifier, though my room has an air conditioner). I thought of taking a bath, because my feet are swollen, but 1) it's not the UK where tubs are huge and wonderful, and 2) even though I would settle for an American tub, there's no stopper, no drain stuff of any sort, just a big scary hole with standing water down there. Eeyew. It wouldn't bother me to take a shower there, though. Nice shower curtain.

The lucky thing is that my luggage was re-checked by people who thought my plane hadn't left. And they might've been right. But between me and the plane were about 300 people lined up to go through security, and some distance between where we were and the gate where the alleged departure was. Well it was a real departure, but I missed it. Again, then, because when we got off the plane from London, half the connecting flights had been missed already. Blah blah blah, but airport for hours, and now hotel with quiet and a table and eight pillows.   <i>(I have my toiletries and some spare clothes, too.)</i>

I'm in room 104 which suits me fine. Others who were in the same long Delta-sent-us-here line were sent down the hall, up the elevator... but I was "down the hall, on the left" and mine is the first room, right off the lobby. Peachy. I'm for it.

I used to be seven time zones from home, but now I'm only two. I'm getting nearer.
Posted by Sandra Dodd at 8:31 PM