June 7, we saw a car in the carpark at a motorway service area [food-and-bathroom stop (better than the rest stops off the interstates where I live)] we saw an old car. The owner came out while we were looking at it and answered some questions, but the only one I remember is that the reason the back end was so pointy and round and didn't open is that the car was based on the design of a motorcycle sidecar. And the backs of those are that way. So there.

You've probably noticed I didn't get a shot of the back end. I thought I had, but then later I looked at the photos.

So I googled a bit until I found this image, and article. I thought it might have been the same guy and same car, at first, but upon comparison, I don't think so. One has a hard top and the other doesn't.

Here's an older photo of one with a hard top. The article is in French. 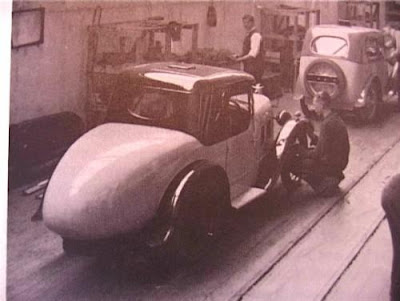 Here's part of an article, in English, with another couple of photos: The coachbuilding side of Lyon's business... first started production under the name of the Swallow Sidecar and Coachbuilding Company. Its initial model was the Austin Swallow 2-seater in late 1926 from a company now with 30 employees. The rather plain Austin Seven original was transformed with a long tail, restyled front wings and a magnificent radiator with chrome surround. The instruments were encased in a mahogany panel and the occupants similarly in leather - the wood and leather tradition had started! Priced at at £175, or £185 with a hinged hardtop, it proved very popular.

(So the hard-top we saw was the £10-more-expensive luxury model.)
Posted by Sandra Dodd at 4:40 PM